We’re just passing the 2 week mark, and I wish it would slow down!! It’s been a great experience so far. We’ve gone on a few trips into downtown Daegu, and also took a short 90 minute bus ride over to Hahoe Village (pronounced Ha-hay). Some of us went to visit the amusement park, E-World, with many lights and fun rides.

Teaching has also been a blast. After the initial hurdles of figuring out what we were actually going to be doing with the students, settling in to teaching became quite simple. Make up a lesson plan for the day, and then try to stick to it. Keeping the students engaged was easier than expected. With the right activities, students felt more encouraged to speak up in English and lost that initial shyness some of us get when starting something new.

Enjoy the pictures below of some the things that went down here in Daegu, ROK.

This is my first blog about my experience so far as an Intern at Kookmin University, Seoul! I decided to wait a bit before posting this because I wanted to settle in and not only have an overview of this experience but real opinions that can hopefully help people decided and get a foreign perspective on a trip here.
First of all, if you ever get the chance to apply for such an experience through Centennial college, if you get this opportunity to avail it for sure!
I have been fortunate enough to travel quite a bit but it is usually vacation and never as long as 4 months. So coming to a completely different part of the world has been an eye-opener and an unforgettable experience.
Working here has given me a great sense of who Koreans are in a professional environment and the differences I can expect from both professional and social circles.
So getting to the main point of this blog is not to be overwhelmed by the great difference you may feel at first and instead learn from it and embrace it. you have to certainly prepare yourself for the language difference and just the social and cultural difference entirely. Have an open mind, obviously research before coming because that helps a lot.
A friend of mine was not as prepared mentally I guess as I was at the beginning about the fact that not many people here (outside of work) can communicate in English, he had a hard time settling in and would get frustrated because he could not speak Korean. This didn’t help him very much and I think he did not enjoy his first few weeks as much as he could have.
So when preparing to try to memorize a few words that can help you while you are out and about, hello, thank you, how much is this, where is this, if you have a special diet then learn how to say that; so I, for instance, eat Halal meat, which is not as common here as it is in Toronto so I practically became a vegetarian or ate seafood, which again I was prepared for and it didn’t bother me much. So I went on to learn how to say “no meat” and little phrases like that.
Also if all else fails to know that sign language is the best way to go, gestures are the universal way of communication and don’t be afraid to look funny at times for that reason because most of the people here are genuinely kind enough to help, some even go out of their way in trying to understand and help you, somehow.
The second point of this entry is for you to learn about the transportation system! If you are lucky enough to come to Seoul, Koomin University, know that it is actually really easy and convenient to travel here. Find someone who can introduce you to the transportation, look at the map and please don’t panic, if you are coming from Toronto where there are only 5 subway lines you might hyperventilate when you first see the subway map for Seoul. It looks insane and impossible to understand but you seriously do get used to it after only a week.
All stops are said in Korean and English, even on the bus sometimes just ask the bus driver if it’s going to a certain station, after your question they almost always put on the English version if it’s not already on.
Download the subway app on your phone, you will have wifi at most cafes so even if you don’t have a local number you can still function. Then just enjoy your time exploring yourself and the city!

After our long trip to Korea we took a break for the day and got some rest. My roommate was a student from Centennial named Phase, though he left the day after. As he showed me around campus I was quite shocked to see the infrastructure and beautiful scenery. Kookmin may be just an average university in Korea but it still is amazing. I will post photos of the campus later on, for now I will post some things I did on the first days of my exchange.

The next day, Urooj decided to get some of her Korean friends to show us around. Our first visit was Myeong-dong, Korea’s most famous market in the heart of downtown (which literally is called Myeong-dong in Korean). It’s a huge market with all kinds of stores and street vendors, though its hard to find items for men (unfortunate for me). One of the things we enjoyed the most was the cafes which always seem to be of high quality. 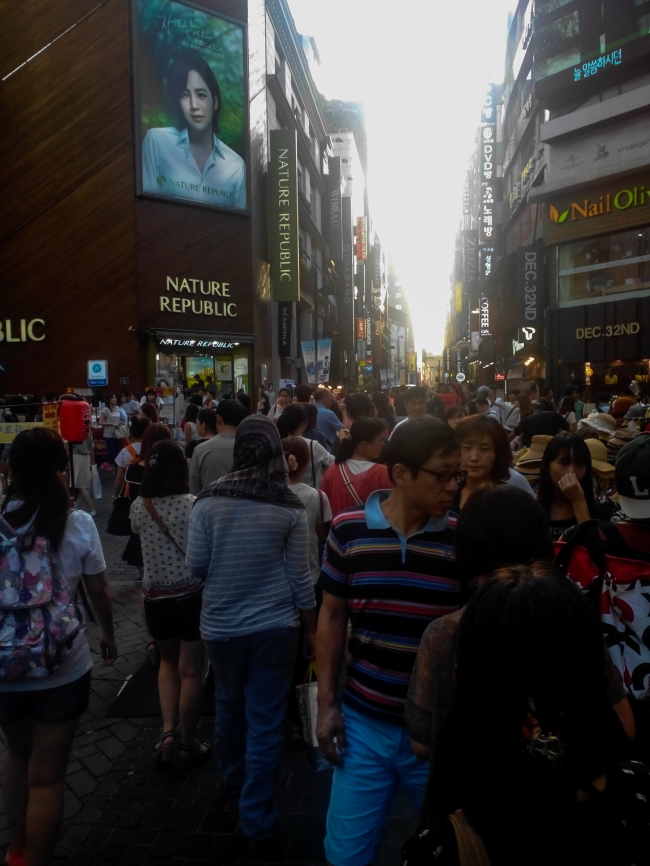 Soon after we decided to find something more traditional, so we visited an area famous for its folk homes. It took us a few hours of walking to see everything; there were also work shops to teach visitors how people lived years ago. I didn’t find it too amazing since it was mixed with modern homes, so it looked odd. I think we would have had a better experience if we seen a bit more and went into one of the work shops.

About a week after my arrival, I was invited by a friend to join him on a group field trip. The trip was to visit a traditional food market (seen below), Korea’s largest palace, and finally the Han river light show. These food markets can be found all over Korea and are very cheap. The food is very different than what you would find elsewhere in Seoul, though it was still delicious.

These coins are used to purchase food in the traditional market. I don’t think they’re used anywhere else; each one is about 50 cents Canadian. 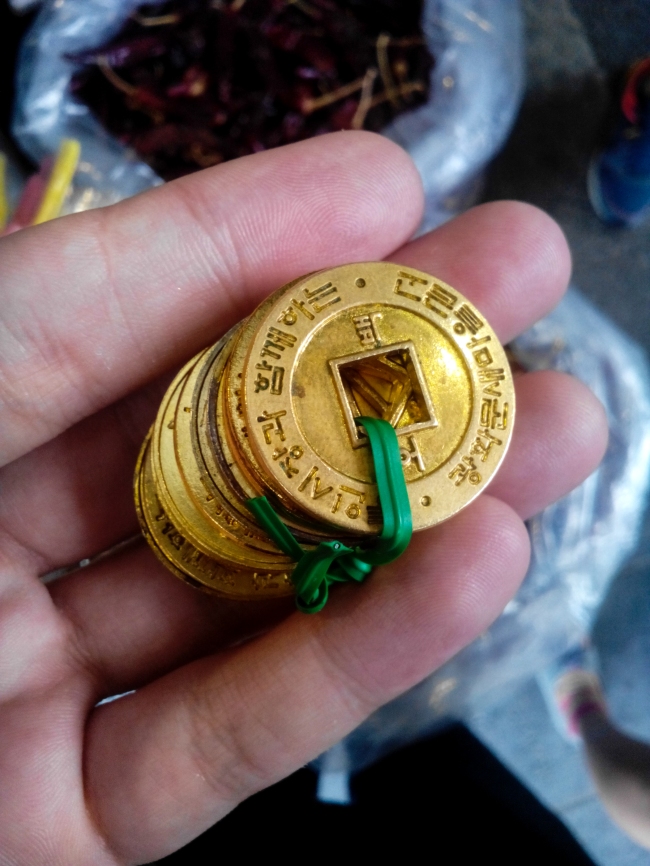 This is the entrance from inside Korea’s largest palace, Gyeongbokgung. There were many visitors probably because it was still summer and the ceremony’s held were for a short period of time. 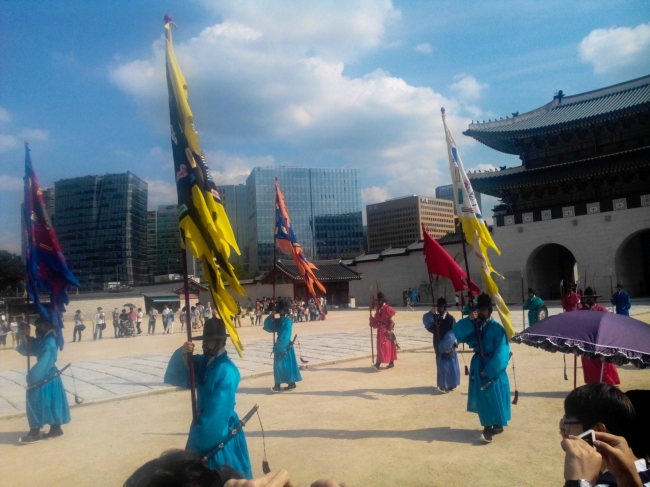 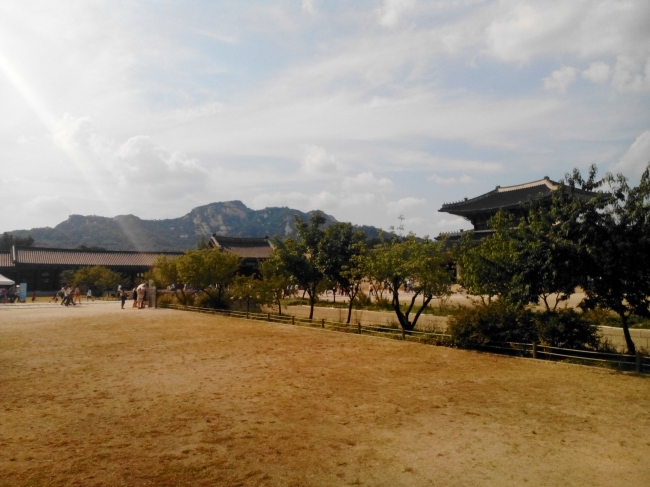 This is the main palace, inside you can find a throne. I believe here is where a ceremony would be done when a new king is given the throne; also when the king had a message for the people it would be done here. As you can see infront of the palace are some sort of stone sculptures, important individuals would sit here according to the importance they have in the palace, more important persons would sit inside the palace.

This is the view of the palace from outside the walls. Beautiful mountains surround Seoul and Korea. There are many events going on in this area since it is a famous tourist attraction. I’m sure almost every tourist comes here at least once to visit the palace.

This is a statue of King Sejong. He is the one who wrote Hangul (the Korean language). I hear it is the most scientific language and I would not be surprised if that is true. From what I have learned already of Hangul I have fell in love with how simple it is to read and write, though I can not say the same for how it is spoken as it is extremely difficult. 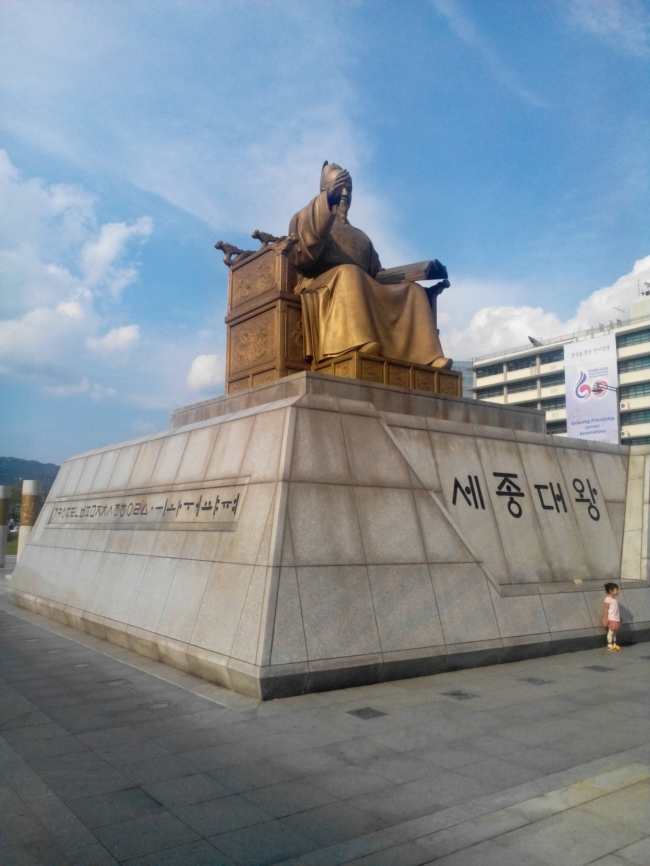 After a long day, the group decided to find a small restaurant in a nearby market, and then head out to the Han river to watch the light show. I did not post any pictures of it because my camera was not good enough for night photos, though maybe next time I will. 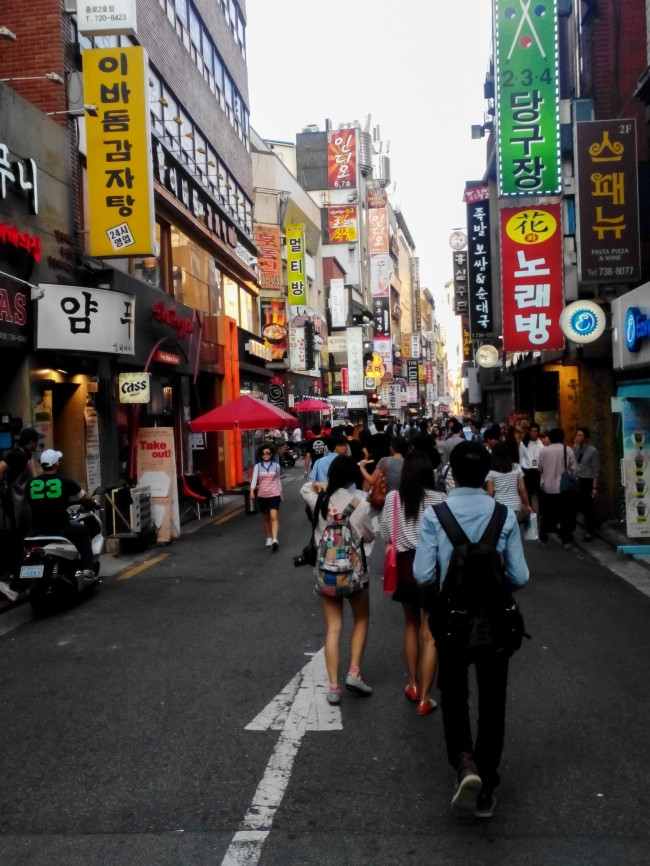 That is all for the meantime, I know I have not posted anything since my arrival but I do plan on posting more often. So far my experience in Korea has been amazing, I would recommend anybody to come here if they have the chance. There are many things to experience in Korea, and it is always hosting various events throughout the country which many tourists and locals participate in.  I plan on returning here some day to experience it a bit more and have a further understanding of its culture.

Seoul! The city that never sleeps. Neon lights up the streets along with the hustle and bustle of people and scooters. However, I live at Kookmin University where the campus is very spacious and the surrounding area is quiet at night (most places close at 9pm). The scenery is my favorite part of Seoul. My university is located right beside a mountain so it is quite the view.

South Korea follows tradition even in this modern age. People always greet each other and say thank you without fail. Yes, Koreans are as kind as Canadians. Also, Koreans dress very well. I’ve played soccer games with students wearing jeans and khakis! Furthermore, food is a big part of the culture in Korea. Kimchi is had with almost every meal and manners are very important. I am just glad that Korean culture allows you to use spoons to eat rice!

Korea is a developed country which is booming economically. South Korea has connections with the U.S and other developed countries. They have excellent housing facilities, affordable yet delicious restaurants, and one of the best transportation systems in the world. This makes living in South Korea like living back in Toronto minus the cultural differences. This first week has been hectic! But now that I am settled in I’m sure there will be more great experiences.