Hello readers, my trip to Busan has been one of my top travels by far. My main purpose of the SIP was to learn and emerge myself with the Korean community and people. Although learning a new language can be intimidating, I can promise you that learning how to read and write Korean will only take 1 week maximum. With the exceptional expertise from the teachers of Youngsan University they really make you understand and teach you everyday sentences to aid you to converse with the locals! Busan was naturally beautiful as the city is surrounded with mountains and the ocean. Dynamic Busan has everything to offer such as its beaches, amazing food, the shopping, outdoor and indoor activities and of course the wonderful people! If I have another opportunity to go to Busan I would do it again without hesitation! 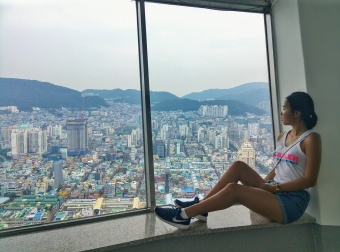 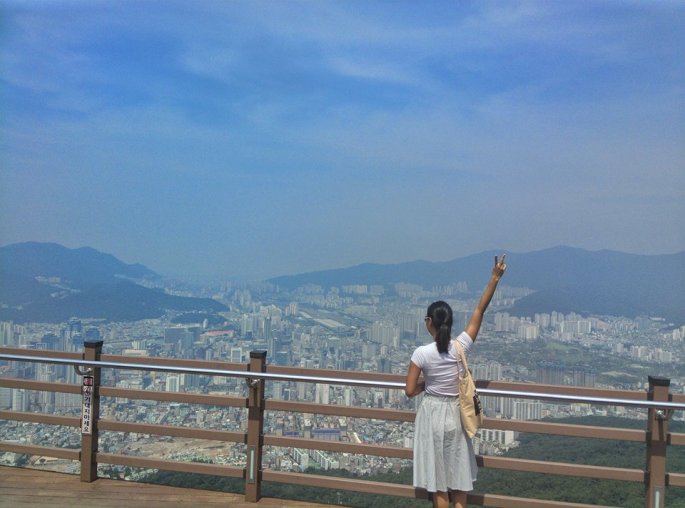 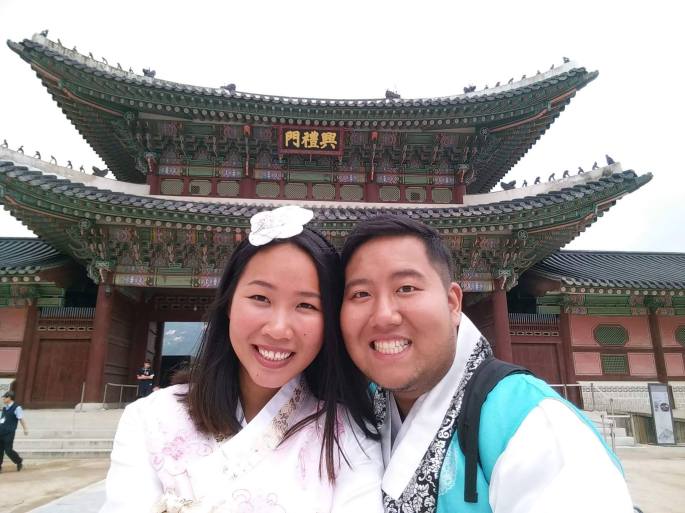 I met my Spanish mother at the bus station when all we could understand each other were “Hola” to me and “Hello” to her. And that’s how my adventures in Oviedo began… 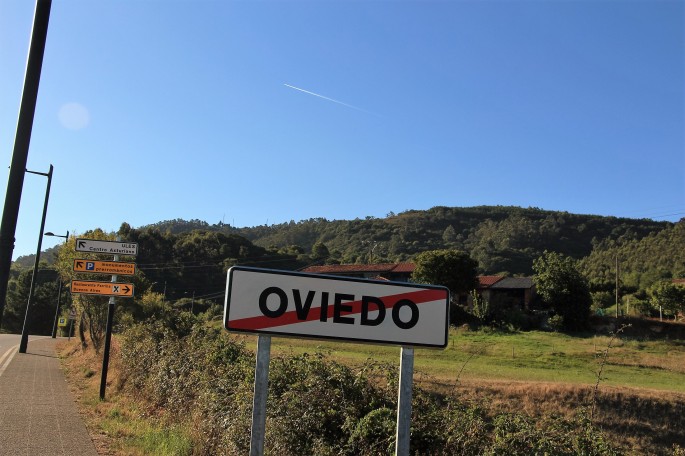 Oviedo is the capital city of the Principality of  Asturias in northern Spain. I got a chance to explore this city during the whole of August, I fell in the love with this small but neat and charming city. 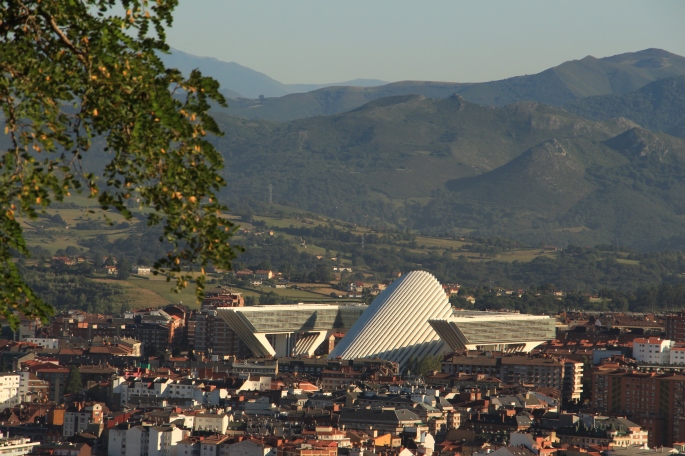 It’s a historical city that founded more than a thousand years ago. And from those ancient buildings, we read history.

Or, catch a glimpse of their wisdom in those statues…

After class, drinking a cup of Sidra (Cider, alcoholic beverage made from apple ) may be a good idea.

Or, seeing around just a few kilometres away from this lovely city…

Or, how about dance? 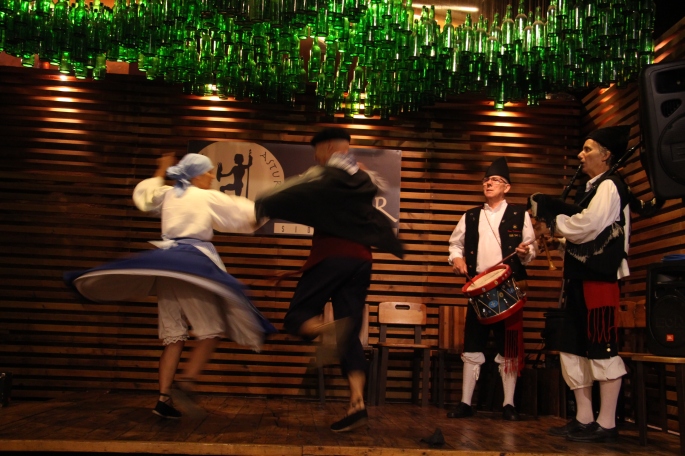 No entiendo is a Spanish phrase I often say when I do not understand what the other person is saying to me while I am here in Spain as part of Centennial’s SIPs.  It is also the same phrase I hear from the other person as well.  In Oviedo, where I am doing my SIPs, I gain more Spanish because the majority of the people you interact with are locals.  One day, my homestay mom wanted to accompany me to places to help with translation.  But I kindly refused and thinking I could do it on my own.  Well, after being laughed at numerous times, receiving all kinds of facial expressions from the other person, and even one person stared at me blankly and walked away.  These are the kinds of reactions I received from the locals when we are not interacting with the same language, me with Spanglish, a word derived from English and Spanish, and the other person with Spanish.  But it is when you get out there to self improve on learning Spanish that these attitudes from people will result.  Its actual vale, okay in Spanish!  So, I hope to help you put your newly learn-ing language to functionality by daring you what I had dared myself to do.  I present to you 7 things I dare you to do while studying abroad in Oviedo.

It’s my third week studying Spanish at the University of Oviedo as part of Centennial College’s SIPs, and I just finished the weekend off with a school trip to Covadonga, Picos de Europa, and Congas de Onís.  These trips show the history of Asturias according to my professor and locals.  Our first stop was the Congas de Onís, which had the Puente Romano.  It is a bridge built in the medieval times from the reign of Alfonso XI of Castille and Leon.  In the middle of the reconstructed bridge, hangs the Victoria Cross, which relates to the battle of Covadonga.  On our way to Picos de Europa, a national park on the Northern coast of Spain, we had to stop for passing cows, that lived in these mountains.  The cowbells rang in the background, as I hiked up and down the paved path along these mountain peaks.  Beyond these islands were lakes, Ercina and Enol, that glowed with a deep blue hue.  It was quite a magnificent view!  What I also saw and learn was that it was a site for mining.

Covadonga was our next location, and it has a history that relates to religions; Christianity and Muslim.  I am not versed in history, but before choosing the SIPs, I researched Oviedo and found this part interesting.  On train and bus rides in Spain, each region and city I pass by, I start noticing geographical, cultural and religious influences.  On another note, I had a chance to see the elegantly dressed guests of a wedding in the rosie wall, Basilica of Santa María la Real of Covadonga.  The traditional bagpipe was played.  According to my professor, it is custom for Spanish wedding guests to gift about 150€ each when they do accept their invites.  I guess I will be sending my best wishes to any future Spanish weddings.

Sherry Ing, currently enjoying the Spanish course in Centennial College’s SIPs at the University of Oviedo this summer.

What am I up to this summer break?  I am excited to say that I am doing a Centennial College summer international program at the University of Oviedo in the province of Asturias in Spain.  It is where I will be spending the next three weeks learning Spanish.  Often, the first week can be nerve-racking, not knowing anyone yet, the new time shift, and unfamiliar customs.  That’s why it’s important to try these 3 things in the first week of your summer international program in Spain that can help you transition smoothly to the new setting.

In the first week, I had my first epic welcoming party and sipped Sidra from an interesting technique.  This is an event you do not want to miss out on your first week in the Universidad de Oviedo intensive Spanish course.  This is where you can meet some of your classmates in a social setting and also try something new. What is an espicha?  It is a festive, social event in Asturia and Sidra is usually consumed at the local sidrería, such as Tierra Astur, in which you would not have a difficult time finding in Oviedo.  Sidra is a cider and is a popular alcoholic beverage in Asturias, that is made from fermented apple juices.  The person usually pours it from a height so the Sidra becomes foamy and sparkling.  As well as, it is drunk in a short amount of time, as it will get warm.  A 1/2 inch residue of the Sidra is left at the bottom of the drinking glass, so to rinse and clean it out.

The video above shows me making my first attempt at pouring the Sidra from the large wooden barrel.  This is a must-try when in your first week in Oviedo, Spain.  I and others had the same feelings when we hesitate to try this technique.  We were worried about it getting all over ourselves, spill it everywhere or it might pour the wrong way. To my surprise, it was not what I thought, I only had some Sidra on my hands, but was easy to clean up.  The night finished off with traditional music, usually, the bagpipe musical instrument is played, along with singing, and dancing.  They also served a tasting of a walnut dessert.

Ayuntamiento de Oviedo is the city hall of Oviedo, where the municipality decisions are made.  It’s one of the places you can go inside with your school group.  The meeting table is where the council communicates with each other in order to make important decisions on the municipal level.