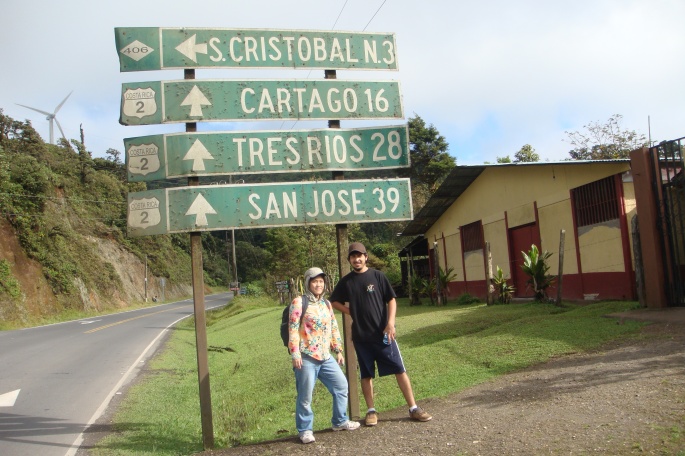 I have given an insight on my 5 hours walk to the Basilica in Cartago with two Costa Rica friends.  At first we were strangers to each other, but as we walked together we were able to motivate and keep each other moving.

On August 2, two Costa Rica friends and I decided to walk 5 hours to the Basilica in Cartago, the old capital of Costa Rica.  The previous day, hundreds of Costa Rica people came from all directions, South, West, East and North.  It was also a holiday and a time of celebration and many people travel here to do the pilgrimage walk or visit the Basilica on these two dates.   The road we took was after San Marcos to Cartago.  We did not come across many walkers but a few.  On our way we met three young boys in their bright soccer team shirts and shoes.  They also had to stop to massage their legs, one boy barely could walk without restriction.  During this 17 km walk we saw many abandoned umbrellas and we walked the path that once was called the mountain of death.  Its called this because the paved road never existed and people easily slipped and fell to their death.  Once we got to the Basilica de Los Angeles, there were many people.  On one side there were food stands and the other the line up to the church.  You have the option of walking into it or be on your knees.  The day was complete with a view of a soccer game in front of a school that once was a government building.  The 17 km walk could not have happened if it were not for the two companion I had with me to do it together.  We made sure we had something to eat, if anyone needed a break, and taken turns carrying bags.  We were behind one another, with one person leading in front to keep our pace going.  Would you consider a 17km walk with complete strangers?  How would you keep each other motivated?

FIVE THINGS TO DO IN LLANO BONITO

This is my compiled list of five things to do in Llano Bonito, Costa Rica. As well as, it can be a guide for making the best out of your rural living-condition experience.