I cannot begin to describe how amazing my experience with Habitat for Humanity Yukon has been. I’ll admit while filling out the GCELE form, Yukon was my last choice. I was a little disappointed when I saw the congratulation email saying I had been chosen to join the team going to Yukon as opposed to China or Costa Rica. I remember thinking to myself, “Ugh. Yukon? It’s in Canada, it’s going to be so boring.” Boy was I wrong. The staff members and other students were such a blast to be with, I would not have wanted this trip to be any other way.

Before the trip, there had been several meetings for everyone to get to know each other. My initial thoughts about the group were that we were all pretty shy and that getting comfortable with each other would take a long time. Also, my perspective on Yukon, and the trip in general, was very limited. I thought that the families we would be helping would be of native descent, I thought we would be staying in tents or a run-down lodge and I thought we would be eating at McDonald’s every day. To say the least, I was pretty ignorant.

Many things surprised me once we were in Yukon.

This once in a lifetime experience has given me a broader perspective on life. It has shown me what teamwork can do. It has introduced me to some amazing people I would have never talked to on my own. It has given me a better understanding of charity vs. social justice, and that more of the latter should be done. It has taught me to keep my mind open and not be so judgemental and narrow-minded. Thank you Centennial and Habitat for Humanity for giving me this opportunity!

Below is a short video I put together highlighting our trip. And by short I mean 19 minutes… ENJOY!

Words cannot describe how amazing and humbling my experience with Habitat for Humanity PEI has been. This past week, I had the opportunity to work alongside some of Centennial College’s most hard-working, respectful and hilarious staff and students whom I wouldn’t have had the opportunity to meet outside of being selected for the GCELE. Additionally, I had the chance to meet and work with some of Habitat for Humanity’s most dedicated and inspiring employees and volunteers. 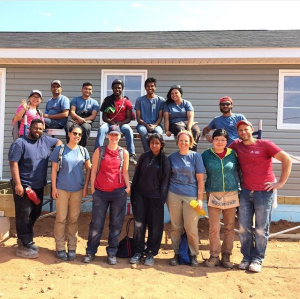 Prior to this GCELE trip, I had attended a HFH volunteer orientation session in Toronto a couple of years ago. I didn’t commit to any builds at the time so I wasn’t sure of what to expect on this trip to PEI. With this trip, I was thrown into close living quarters with 13 strangers. We had little Internet access, very few hours of screen time, communal accommodations and a structured schedule set by Habitat for Humanity.

Here are some things that I learned while on this GCELE:

I had a wonderful time in PEI and I am so grateful to have experienced it through Centennial’s amazing GCELE program. From my experience, Islanders are very friendly and gracious people. The lifestyle there is very relaxed compared to Toronto and there’s very little traffic on the roads. There’s a strong sense of community and pride in PEI… I mean it is the birthplace of Canada after all.

The last blog I wrote I talked about specific experiences that were very valuable in my learning throughout my trip in PEI. This one is more about what Habitat is all about and the learning that I experienced personally. First off Habitat for Humanity is a not for profit organization that helps families that are in need of affordable housing. To qualify you must make a certain amount of money a year, put in 500 hours of volunteer work for Habitat and the family also pays a mortgage back to Habitat for Humanity and that money goes to making another Habitat house for another family. That is pretty incredible in my mind because the families put in the time and buy paying the mortgage of there house Habitat is able to provide other families with the same opportunities to fit their needs.

Personally I did not know what to expect going on a GCELE for Habitat for Humanity within Canada. There are differences in culture even in the same country! Their highways are different, their traffic lights are different, the air is different and the people are different. They are so relaxed, calm and friendly. You hardly ever go out without seeing someone you know. I personally like this small tight community because I am a very friendly and social person who loves to talk. There was a lot more physical work than I expected! Our team and myself personally pushed ourselves above and beyond what I thought I and our team was capable of. I never envisioned myself shingling a roof. That was an incredible and confidence boosting experience. It was also an emotional and mental roller coaster. We had to learn how to work with others who come from all different backgrounds, cultures and beliefs. We also lived in very close proximity to each other for 8 days which can be tough having little privacy. Being able to mentally and emotionally prepare yourself to get out of bed even when I was exhausted and sore was hard. But something I always said throughout this trip was that this trip was not about me. Every time I said that I was able to move forward. I became mentally and emotionally stronger because I was tired, sore and still worked. If you got hurt we would stop pull ourselves together and keep going. That’s just how our team worked. We worked so well as a team and their is no other group of people I would of rather built this house with than them.

Thank you to Centennial College, Habitat for Humanity PEI and all the people that made this trip possible. I truly learned a lot and can proudly and confidently say I am a stronger person physically, mentally and emotionally.

This is just a little video I put together about my team and I on our trip and the experiences we had the opportunity to have!