My GCELE experience in Brazil was amazing. It was a great opportunity for learning together with the opportunity to meet new people and to make new friends. In this GCELE we had the opportunity to learn a lot about coffee production and its relationship with social, educational, and environmental practices.

We stayed in the “Cachoeira da Grama” Coffee Farm for 10 days when we could participate in the coffee picking and selection of the best cherries for exportation. We participated in the harvesting of the “canario” and “bourbon” variety of coffee, which has yellow and red cherries, respectively. The picking can be done selectively or non-selectively. Selective picking means to collect only the cherries that are mature, which increases the quality of the coffee, but it requires more time and is harder to be done. Non-selective picking is the collection of all the cherries, in a faster way, but not mature cherries may also be collected. Furthermore, it was possible to observe the mountains of the region where the coffee has been planted, which is directly related to its quality and uniqueness. 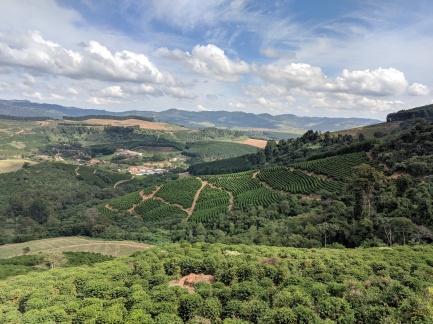 We could also have the opportunity to visit a coffee farm who started the production of olive oil (Irarema Farm) and another one who started the production of macadamia (Corrego das Pedras Farm). The soil and conditions of the area make both production very successful. The complexity of the environment where the olive’s tree grow influence the aroma and the testing of the olives. It occurs because several other species grow together in the area, such as coffee, eucalyptus, guava, and others. In addition, the modern machinery allows the extraction of the oil to be more selective, creating a huge variety of olive oils. In the Macadamia Farm was possible to observe the trees, originated in Australia, has been grown successfully in the mountain climate in Brazil. The Macadamia seeds are planted and when it grows, the baby plant is planted in the soil. The mature fruits are collected from the soil, who had already fallen from the trees by being ripped already. They are selected by washing, that separates the fruits by weight. The good fruits sink and stay for drying for two days. After that, they are separated by hand to select the fruits that do not have any imperfection.

After the coffee picking, we also have the opportunity to learn more about the coffee production in Brazil, and the differentiation between the regular and the specialty coffee. At Bourbon Specialty coffee, we could learn how they select, buy, and grade the coffee they receive from the producers. The producers deliver a sample from its coffee, which quality is evaluated by giving them a score up to 100 points. The coffee selected for exportation usually gets a score from 80-87 points. Coffee which does not achieve this score is sold in the domestic market. 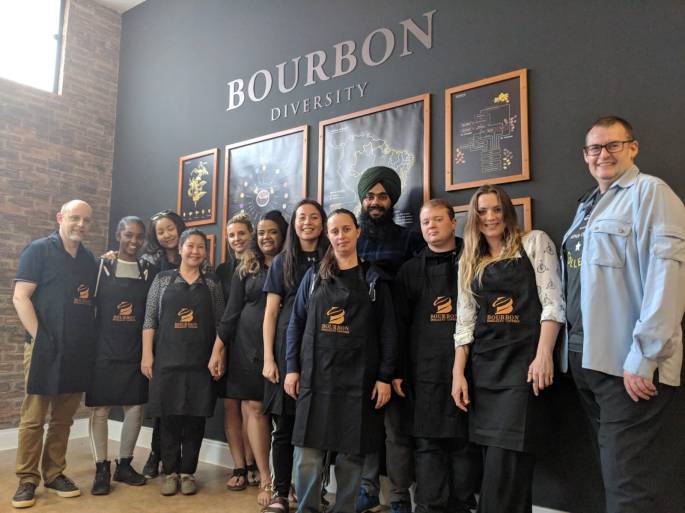 Also, at school, we participated in the preparation of the kid’s food and we could observe they eat healthier food than the Canadian kids. Furthermore, we helped to improve the school’s garden, where they cultivate organic vegetables that are used to prepare the kid’s food. We also had the opportunity to play soccer with the kids and to participate in a very traditional Brazilian dance, called “Quadrilha”, which consists in a dance in pair with some steps according to the music. 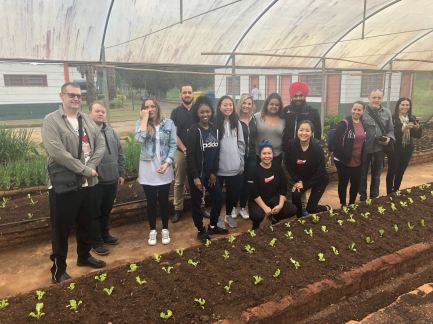 In addition, we could observe two social projects associated with culture. One of them is called “Projeto Guri”, where kids learn how to play classical instruments. There, the kids are divided according to their learning in groups A, B, C, with the group A being the most experienced kids. We could watch the presentation of all the groups and notice their evolution in learning. The other project is called “Bourbon Musical” and the kids learn how to play different instruments and how to dance traditional Brazilian rhythms. In this project, the whole family is assisted, with psychological and even financial help for them to restructure their family. In both projects, the kids only go in a different shift from their regular school shift.

My experience in Brazil was amazing because I could learn about my own country from a different point of view. I knew that Brazil was a great producer of coffee, but I had no idea that it is also a great provider of specialty coffee. The sad part is that the coffee sold inside the country is the worst quality one and most Brazilian people do not have access to better quality coffee. However, I could learn more about how to make better choices in my personal life, choosing to consume less, but in a better quality.

It was also very interesting to learn how the production of coffee is related to the local community. In the farms we visited, the workers can live inside the farm, in houses provided by the owner of the farm, not having to travel to work and avoiding the expenses of buying or renting a house. Their salaries are mostly the minimum wage, which is very low in Brazil (around Cad$ 300 per month), but some workers also receive some basic food as part of their salary, that is called in Brazil as “cesta básica”. This is a very low salary, but since their lives are very simple and they do not have many expenses for transportation and housing, they may not struggle to sustain their families.

In addition, this salary would never allow the parents to pay a private school to their kids, but in the farm, there is a public school that seems to be very good, compared with the reality of public schools in Brazil. They have around 15-20 kids per class, which is a very good number since in the public schools in Brazil this number is usually 40-50. The teachers seemed to be very passionate and dedicated and the kids look happy in their school. It was very nice to see a good public school in my country because of the reality in the rest of the country is completely different.

On the other hand, it was very frustrating to observe that the producers use the word “sustainable” as a stamp for their coffee, but what I observed in the farm is far away from being sustainable. As an ecologist, my point of view of sustainability is when we have the whole ecosystem preserved in order to preserve the land, the forest, the water, and the animals. What I observed was a very degraded ecosystem, with the land dominated by coffee plantations or by species that are not native from Brazil or that area. The waterfall that occurs in the farm is surrounded by bamboo trees, which are not native and, even worst, are just one species that does not provide the necessary food for the native animals. 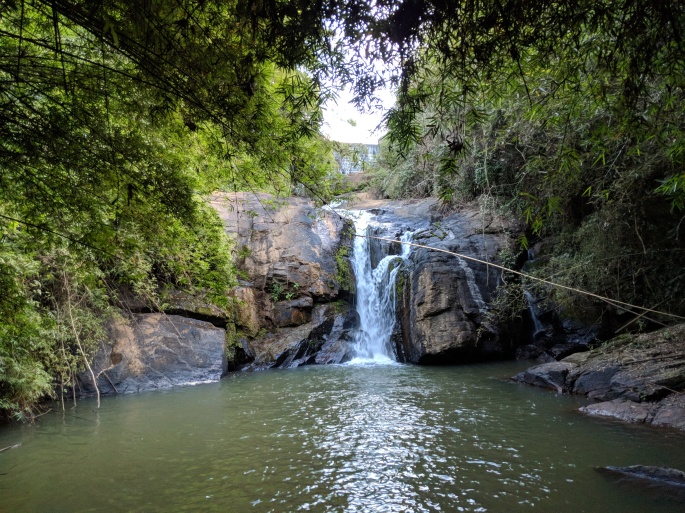 In addition, when we visited the Macadamia Farm, it was explained that they need to preserve a percentage of their area, according to the law. However, what I observed is that they planted any species, with no criteria. Brazil is one of the countries with the highest biodiversity in the world, and each area has its own characteristics. What they were doing there was just planting any tree, with no respect to the characteristics of the region, which will implicate in not playing its role of preserving the ecosystem. Furthermore, the fragments are not linked to each other and these very small areas of preservation cannot support all the native fauna, especially big animals, such as the jaguar and the cougar, with are the biggest Brazilian native animals, which play a very important role in the ecosystem.

Therefore, my experience in Brazil was amazing because I could learn a lot and observe a good reality from the point of view of the community. However, I was sad to see that the natural environment has not been respected and Brazil continue to lose its biodiversity day after day. I hope my reflexion inspire others to apply for the next GCELE, especially to Brazil, to learn more about a wonderful country that has much more than samba, beaches, and soccer.

There was an error retrieving images from Instagram. An attempt will be remade in a few minutes.