Trip of a lifetime to say the least! This past June I had the opportunity to travel to Prince Edward Island to participate in a GCELE and represent Centennial College, my second home.

The first day we spent at the Habitat for Humanity warehouse cutting lumber that was to be made into picnic benches for an upcoming fundraiser. It was rainy and cold but that never stopped us! We pushed through lifting, cutting, transporting, and organizing every single piece of wood. We encouraged each other and most of all we completed our task with no injuries, all 10 fingers in tact!

The second day we finally got to work on the house. It was amusing to see all of the ladies minus Pierre, wearing hard hats with tool belts. Most of us had never even picked up a hammer before. We divided ourselves into a few small groups and we worked effectively. At the end of the day it was an unbelievable feeling to see how much worked we had completed. We all had a sense of accomplishment knowing that our hard work would give a family a home that they would otherwise not be able to afford.

Later that night we had the pleasure of meeting Erica and her daughter, who are the future owners of the house we built. The moment we were introduced it gave me clarity. I knew then that no matter how many bumps and bruises I got, I would never quit.

Overall it was an experience I will never forget. Not only was I able to apply what I learned during my first year at Centennial College, I also was able to learn so much. Hats off to Pierre and Anjana, at all times they kept their composure and helped to keep the group focused and on task. Thank you Centennial College for the opportunity to travel to Prince Edward Island and help to make a difference in a deserving families life. 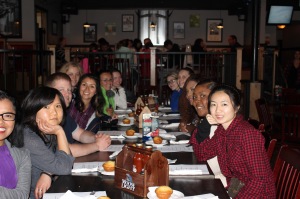