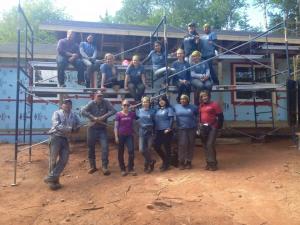 I now feel educated on the work that Habitat does and I believe as a student this is a great organization to be involved with because you donate your time and skills, not your money. I will say that this trip was very labour intensive and I highly recommended any student who wants to do this GCELE works on a build site in Toronto before signing up. This GCELE is extremely physically demanding but a great way to push your limits and see what you can accomplish.