Being chosen to go on a GCELE within Canada – PEI I did not really understand why in Canada as I did not see absolute poverty in Canada which was my idea of poverty. Although Canada has a lot of relative poverty such as living pay check to pay check. After meeting the family at the welcome dinner I started to understand why I was here. Erika (the mother) also wrote us the letter below which was so nice to read after meeting her. 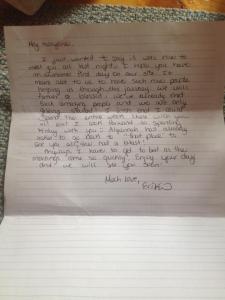 I realized that this trip was not about me but to serve others. I still had not seen the awe factor of what my hard work was going to do for a family to its full extent until Day 4.

Erika and Alyannah (the family we were building a house for) showed up this afternoon to see the progress on the house and they were so happy. When I asked Alyannah (the child) where her room was she would run to her window inside and say look this is my room banging on the window with such a big smile on her face. That was worth it all, to see her face was incredible. Aly asked me if we could go out back to see the work we had done on her house so I went with her. I brought her back inside and Erika came up to me and said thank you so much. She was like I am just going to give you a hug. That was absolutely amazing to be apart of.

This encounter/entry made me realize what we were doing was giving a family such joy, hope, safety and love. They were so thankful by the end of the week of what our team had accomplished. We built the entire foundation of her two bed room, one bathroom home. At the end of the week the family and Habitat for Humanity PEI thanked us with a thank you dinner. Erika and Alyannah were so thankful! Alyannah gave us each one of these unique frames below with a map of PEI on it. Alyannah had drew a heart on it where we built her house. It was absolutely precious to see her face and for such a shy little girl at the beginning of the week to come out of her shell and love us so much! 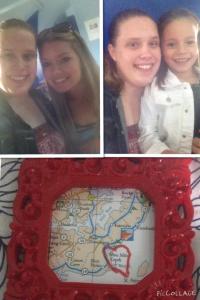 Myself and Erika top left, Myself and Alyannah top right, and the thank you gift from Alyannah on the bottom.

One thought on “The Changing Experience”