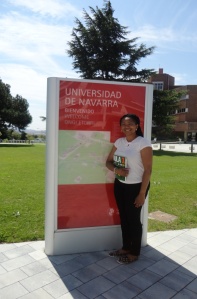 The trip to Pamplona, Spain was out of this world. I was thrilled that I was given the opportunity to be taught Spanish at the Universidad de Navarra, taste the delicious food and witness the rich culture and history of the Northern city of Pamplona, Madrid, Barcelona and Southern France.  “It was super-duper awesome”, imagining all the experiences and excitement that I had over the last 14 days.

As a representative of Centennial College, it is a privilege to be a part of the GEO learning experience.  However, I must compliment Centennial College and the GEO programme, on the tremendous opportunities that they provide to their students. Assisting students by making available language and culture programs abroad and by allowing a different learning experience.  It ultimately helps one to gain knowledge of the global village and provide us students with an educational opportunity from an international perspective. 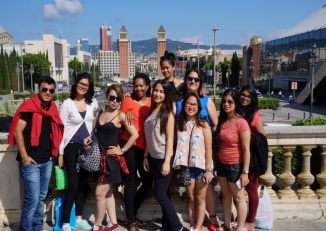 During my stay in Pamplona Spain, our group attended the Spanish Language and Culture Intensive Program at the University of Navarra.  Mainly we learned Spanish and a bit about the history and culture of the people. During our free time away from the university, the group and I enjoyed the city tour of Pamplona, where we visited the Cathedral Et Murallas, and enjoyed Pintxo’s Night out. Which consisted of eating lots of pintxos (small snack consisting of a slice of bread, mixture of ingredients on top with a toothpick holding it all together. On our free evenings my classmates and I would go out and explore on our free time. We had the opportunity to travel to the east coast of Spain and explore Barcelona. The city that is a mix of gothic and modern design, with the most beautiful beaches in the world. The group enjoyed the sight of Barcelona as it is like no other spectacle in the world.

Below are pictures of some of the things we saw while travelling about through Spain:

Centennial Students at the Fort in Pamplona 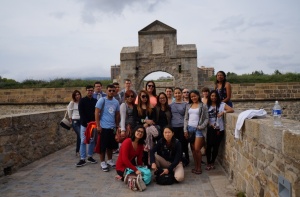 Excursion to Royal Palace of Olite

Running of the Bulls. 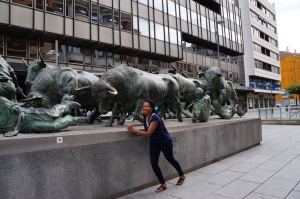 Leaving the country was especially difficult, as the culture was so unique and was much different than Toronto; Pamplona resembled a medieval city which seemed more relaxed in comparison to the ongoing hustle and bustle of Toronto. Anyways, all good things must come to an end and I was excited to see my family upon my return. I feel very grateful to have been able to explore parts of Spain through a historical and cultural lens; while experiencing it with an amazing group of people. Learning Spanish was not easy as it is an ongoing pursuit. But, I now have resources to help encourage the progression of my learning. This has been a journey that was truly indescribable; I would like to thank Centennial College for the opportunity of allowing me to experience Spain and to learn internationally.