Luckily for us, our hostess Rosa arranged a much-needed day off for us on our first Friday.  We’d had an extremely full calendar, and were about to have a non-stop weekend, so to have the day off to explore at our own pace was very much appreciated.  Most of us ventured off to Isla Mujeres, the Island of Women, though we went in different groups and with different agendas.

Claudette, Ashley & Melissa L. on the ferry to Isla Mujeres

My group of 4 traveled by ferry first thing in the morning, as we had a few places we wished to visit, and didn’t want to be out too late, as we had a group dinner planned that night with representatives from the Universidad Tecnologica de Cancun.

First on our agenda was the Tortugranja, a turtle farm that works very hard to protect a variety of endangered sea turtle species.  Volunteers and staff collect eggs laid in the sands, so that they can be safeguarded against predators.  The eggs are relocated to a specially insulated area, re-buried in the sand, and the spot labelled with the type of turtle and date of burial for reference.  Once the turtles begin to emerge from the sand, the hatchlings are transferred to tanks inside the farm, so that they can grow to a size that will give them an even greater chance for survival.

The farm also has tanks that contain turtles that wouldn’t normally survive in the wild, whether due to injury or genetic anomaly.  These tanks are located in a small aquarium for visitors, which is inhabited by not only turtles but other sea species, including sea urchins, starfish, horseshoe crabs, many types of fish, and seahorses.  The outside area has a cordoned-off section where visitors can arrange to swim with rays and nurse sharks (we did not). 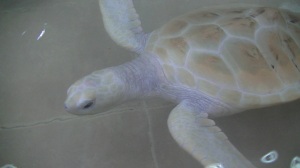 One of the many residents of Tortugranja, who might otherwise not survive in the wild

Next on our journey was the cemetery in which the infamous pirate Fermin Mundaca built his own tomb (Mundaca wasn’t actually a pirate – he was a slave trader who felt that piracy was a more noble profession and so labelled himself as one).  Mexican tradition honours the dead with holidays, feasts and celebrations, and it is no surprise that their cemeteries are filled with colour – large tombs are built with display cases on top, to showcase photos of the deceased, and for families to present gifts of food, beer, and toys for children gone too soon.  Turns out that while Mundaca did indeed construct his tomb there, he is in fact buried in Merida, on the northern coast of mainland Mexico; legend has it he built the tomb so that he could be near his unrequited love, an island girl almost 40 years younger than himself.  While cooling off in the church at the top of the cemetery (temperature was around 45 degrees that day), we met a rather large group of students from York University, part of an Asian fellowship group on a month-long mission to the homeless settlement located adjacent to the cemetery, who were also on a well-deserved day of free exploration.

Our final destination for the day was “Taller Artesanias de Mujeres”, the Women’s Beading Cooperative.  Local women, eager to develop their own incomes, created this co-op a number of years ago.  Approximately 55 women are members, and they can often be found sitting together around a large table in the center of the co-op.  They create the most amazing beaded jewellery, handbags and other accessories, and sell them directly in the store.  Each piece is labelled with the artist’s name, and 80% of the price goes directly to that artist (the other 20% is given back to the co-op for supplies).  For these women, the co-op is a life changer – many of them would either be unemployed or working for someone else for much less than they are able to earn here.  Purchasing souvenirs at the co-op was a no-brainer:  while I didn’t buy much, the four small things I did buy translated to almost 10 days of liveable income split between three different artists.

Once again, many thanks to everyone at Centennial College and Universidad Tecnologica de Cancun for making this trip possible – what an amazing experience!