What a great way to end off the study abroad semester with Amsterdam.  Yes! Amsterdam was my last major trip before exams and the end of my European excursions.  I was in Amsterdam for 7 nights enjoying every part of the city with their day-life and night-life.  This city is by far the most interesting and spectacular sites I’ve ever seen.  There are things that you would never imaging possible in North America. 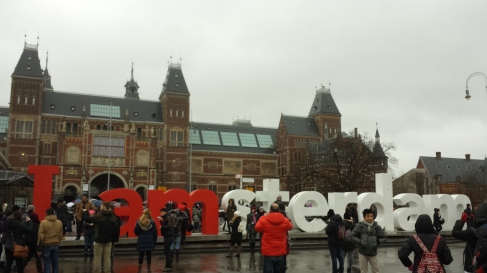 The infamous “I-am-sterdam” letters.  This was the first site we visited after arriving in Amsterdam.  It was raining pretty much the entire time I was there so the weather in Amsterdam is not so great but everything else was perfect.

From the “I-am-sterdam” letters, we went on to see the famous Vincent Van Gogh oil painter.  Van Gogh was a creative painter inspired by many other artists in the mid-late 1800’s and most of his work was done in the 1880’s.   In the painting above is a painting of himself at work. 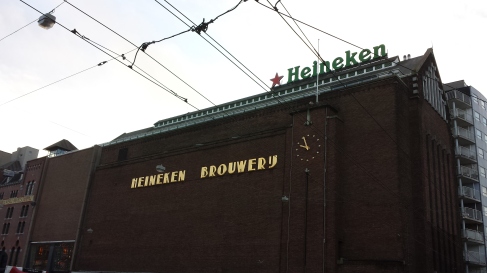 This is 1 of the 165 canals in Amsterdam.  The 165 Canals in Amsterdam is combined to over 100km in length.  Nearly every street you walk into, you will see a canal and boats everywhere.  Many citizens live in these boats due to the fact that rent is very expensive in core of Amsterdam.  There are also boat Hotel/Hostels where tourist can rent to experience the Amsterdammer’s living arrangement

They have more bike parking than they do for cars.  This is one bike parking garage that I saw while walking in the city center of Amsterdam.

Amsterdam is one of the many cities that are known for bikes.  There are 747,000 residents living in Amsterdam (2.1 million in the metropolitan area) and there are over 600,000 bikes register.  This almost means there is 1 bike for every citizen living in Amsterdam.  We rented bikes for a few days to fit in with the crowd and it was pretty convenient, especially when going from one end of the city to the other.  The roads are pretty confusing but the bike lanes were on every street no matter what.  You would think there would be a lot of accidents but the bikers and drivers have their own little system (bikers always comes first).

These windmills are very common in the city which are used for restaurants and Cafe but the well-known ones are further out near the country-side which we were not able to go. 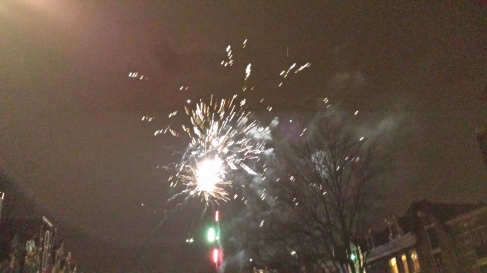 New Years Eve was crazy in Amsterdam, I think this was the best firework show I’ve ever seen.  From 5pm to 2am, people were shooting fireworks on the street.  People were able to buy large exploding fireworks where in Canada, only the city were able to use.  They had fireworks that sounded like bombs were exploding, this was not very safe.  The city provided a show and had four different locations along the water.  The city would give a show and when that finishes, the people would give a show.  I remember from 1-point from 11:20pm-1am, there was not a single moment of silence due to the large amount of fireworks going off.

Like I said before, this probably is my last European trip this semester but if anything else comes up, I will keep you all posted.  Thanks for following me with my adventures throughout Europe.