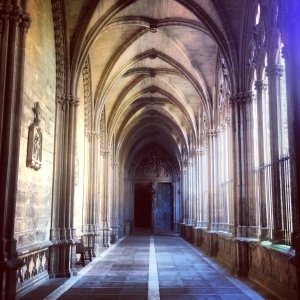 It’s only been several days since our arrival in Spain, and I’m already beginning to experience the familiar ebbs and flows of culture shock. Last month, I took part in the GCELE Jamaica program and was still repatriating before I was uprooted once again for Spain.

After nearly 10 hours of flying, followed by another 2-hour bus journey from Bilbao airport, I finally arrived in the lovely city of Pamplona. It is an incredibly vibrant, culturally unique city, rich with historical significance, and located in the Basque region of Northern Spain. Pamplona is the capital city of the Kingdom of Navarre, inhabiting about 200,000 people, and is considered to be the wealthiest part of the country. The city perhaps garners the most infamy for its annual San Fermín festival, including the running of the bulls event.

In addition to its rich history, I was here to attend the 2-week intensive Spanish course at the University of Navarra. Our arrival that day brought us straight onto campus where we met our homestay family. The campus itself is as magnificent as it was beautiful, comprised of all major academia. Most notably, the University has a strong reputation for Business Administration and its Medical School.

I was paired up with a fellow student from Centennial and after brief introductions, we were whisked away to our home for the next 2 weeks, where we settled in and had a pleasant meal with our host. Carmen is a magnificent lady who speaks only Spanish. Though this most certainly meant that we could not speak any English, I welcomed the challenge as there was no shying away from my Spanish foibles. Admittedly, for the first few days, there were a lot of hand gesturing, head-nodding, and other non-verbal adlibbings. After a few days, it became much more natural and a bit silly at times too.

The first day of school the following day made me reminisce on the days of my earlier undergraduate career: full of anticipation and excitement. How many other students will be there? Where will they be from? Many questions, but perhaps it was over-shadowed by the novelty of my surroundings.

I’ve had only a week of full-on Spanish lessons, learning everything from its language and culture, to its extensive history and traditions. Expanding my vocabulary every day, each trip home at the end of the day seems to allow me to communicate a little better with my host.

There are still many more lessons ahead, and I hope to continue getting better everyday. As they say in Spanish: un poco a poco (little by little). I think that it’s quite easy to be discouraged in this type of environment, where it gets uncomfortable when you essentially lose your ability to speak. Though difficult to do, I believe it’s important to embrace the experience and to keep an upbeat attitude towards it. This is precisely what I’ve tried to do, so we will see how things go over the course of the next week. It also doesn’t hurt to have a little fun too able we are at it!

Until next time! Hasta luego! (see you later)