During this long weekend of the Qingming Festival, I took my cousin to Shijingshan Amusement Park, which located near the subway station of Babaoshan. It was rainy in the past few days and onSaturday, we had the clearest sky I’d ever seen since I got to Beijing this time. Luckily, there were not so many people as we expected and the lineup for each entertainment was within five minutes. There’s another famous amusement park in Beijing named the Happy Valley, it’s new and very popular among the young people. We would spend a lot of time waiting if we went there. And the Shijingshan Amusement Park is more kid-friendly; the theme of the park is based on the Grimm’s Fairy Tales, there are castles and status of famous cartoon characters such as Cinderella, Donald Duck and Mickey Mouse; and most rides are open to kids with the height over 1.2 meters.
Love the sky..as clear as it’s in Canada~ 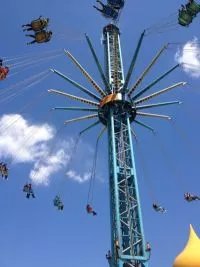 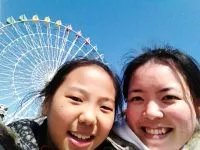 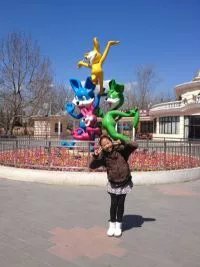 You can’t call it an amusement park without the merry-go-round. 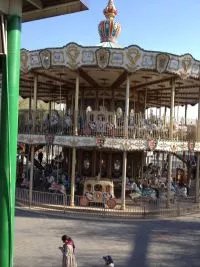 Get ready for excitement! 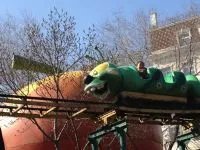