This past weekend, I was invited by my coworker to get away from the city and get a taste of real Panamanian traditions and culture at the Festival Nacional de la Pollera (translate: The National Pollera Festival).

Now, my first question was “what’s a Pollera?” .. the Pollera is the national dress of Panama. Dating back hundreds of years and influenced by their Spanish roots, Panamanians have identified this dress to be one of their national symbols and a representation of their history and culture. I was excited to experience it all for myself!

A five hour drive into Panama’s interior found us in Las Tablas; a small town seemingly in the middle of nowhere, but the heart of Panama and the home of many of Panama’s annual festivals! (It’s also the supposed ‘birthplace’ of the Pollera, I’ve been informed.)

We stayed in a cute hotel (by hotel, I mean two stories, which is usual in small towns that I’ve seen… most of everything is one story in small towns in Panama), and upon our arrival I had my first experience with the local wildlife when we found a tail-less gecko in our room!

Saturday evening we attended the Camisilla and Sombrero Pintao contest (translation: Traditional Men’s shirt and Peasant’s Hat Contest) Note: what Panamanians know as the peasant’s hat, the rest of the world knows as the famous “Panama hat”.

The shirts were all handmade and white with gold buttons and white detailed embroidery. The hats were also handmade and straw, with black line detailing. I was informed that the judges were looking for several things, including cultural accuracy, quality, and elegance and grace of the wearer (the men (and some women!) danced up to the judges table to have their shirts and hats inspected).

The shirts, if bought, average anywhere from 600-1000 dollars, and the hats can range from 200-600 dollars. They don’t joke around with these things!

The big event was on Sunday: the Pollera competition. Dozens of women dressed in their finest Pollera and danced across a runway to be judged on quality, cultural accuracy, grace and demeanor, as well as on their jewelry and headpieces.

These women don’t mess around… the dresses themselves have different categories, each representing a different region or cultural aspect. Mountain Polleras, for example, had colourful skirts with floral prints and are less formal and meant for more daily wear.

The dresses themselves are all handmade and start at 5000 dollars. The jewelry worn to complete the outfit totals a minimum of 50000 dollars, and the head pieces are a combination of glass beads and gold combs. I was blown away by the intricacy and elegance of it all!

We didn’t stay for the whole competition due to a five hour drive that had us home only after midnight, but the culture that I experienced and witnessed was refreshing, educational, and lots of fun. I felt like such a tourist 🙂 In the building that all of the competitions were held there was no air circulation and I swear, with over a thousand people packing in to see the competitions, we were actually melting. They gave out free paper fans (which I thought was the coolest and smartest thing ever), but I’m pretty sure I sprained my wrist from all of the hours of nonstop fanning. 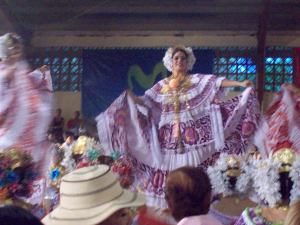 P.s. in the center of the front and back of the Pollera tops are what I can confirm look like pom-poms… your eyes are not deceiving you! What the significance of them is, I’m not sure… but I am looking into it! Will be keeping you posted 🙂